Imagine a lush deciduous forest surrounded by deep ravines, a railway track snaking through it & to top it - a spectacular waterfall!!

Welcome to Dudhsagar Falls - listed as India's 5th tallest waterfall & a four tiered waterfall with a total height of 310 meters.  The Khandepar river, a tributary of Mandovi flows through the western ghats. The falls is known for its milky white appearance and hence the name (in Hindi, Dudhsagar means ocean of milk). Mythology mentions that a prince played peeping tom on a bathing princess in the river. Embarrassed; she poured the jug of milk in front of him to form an improvised curtain to hide her body, while the maids rushed to cover her with her dress.[it’s unclear whether she ended up marrying him; as it often happens in mythological stories ! ]

The story goes that , it is that sweetened milk that cascades down the mountain slope to this day as tribute to the virtue and modesty of the Princess, as the "Dudhsagar Falls".
To experience its spectacular beauty; you have to visit it at least once. Having heard quite a lot about it from my dad – who spent a major part of his childhood in that region; we decided to visit the place. Time has stood still to a large extent; since my dad’s childhood days in the region; except for two major changes – it is now an Indian territory [remember Dudhsagar is in Goa – previously a Portuguese controlled state] & now it’s a big time tourist attraction. The best time to visit the falls is during the fag end of monsoons & preferably on weekdays; when it is relatively less crowded. Monsoon can be real intense & it is best to avoid a trek during this time.

The visit was a spur of the moment thing & obviously; we had to rough it out. However; with proper planning; one can catch the passenger trains & directly reach the falls. But then; there is no fun; unless you trek it to the falls & enjoy the spectacular views en route – which would be totally lost in a speeding train!

We took an early morning train to Londa Junction & from there reached CastleRock station. Castle Rock used to be the last Indian station during Portuguese times & there used to a border check post with Customs officials to prevent smuggling of gold, silver, liquor, cashews & other precious commodities. At CastleRock; we were banking on a goods train to ferry us to the falls. Unfortunately; there were no goods trains scheduled; so we had to start our trek to the falls.

The trek from Castle Rock station to Dudhsagar is approx 14 km hike along the rail track; passing through approx 15 -16 tunnels (typically averaging 180 meters). One must admire the tenacity of Britishers / Portuguese who built the tunnels & rail line amidst such tough conditions. This is the most scenic route with various waterfalls, dense vegetation & lots of beautiful butterflies! Luckily; monsoon was already on its way out & we were thus spared of incessant rains.

We trekked to Caranzol station – small shed that passes off as a station. This station is purely for operational purposes to monitor train movements. We were lucky to hitch a lift in a goods train going towards Dudhsagar enroute to Madgaon. This 35 + wagon train was pulled by 3 locomotive engines. This is an indication of the toughness of the ghats section. We were put up in the driver’s cabin of the middle engine & had the entire empty cabin to ourselves. Travelling in the engine’s cabin was another spectacular 1st for me. Totally cherished the moment! We reached the falls within 15 minutes. The entire trek + train hitch to the falls took us approx 3 hours. Legs were aching; but the entire trek was worth it. 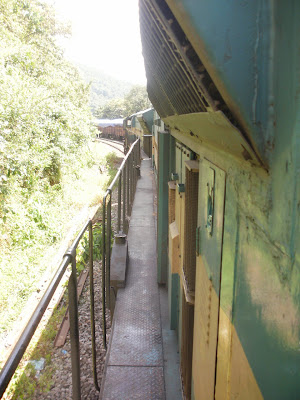 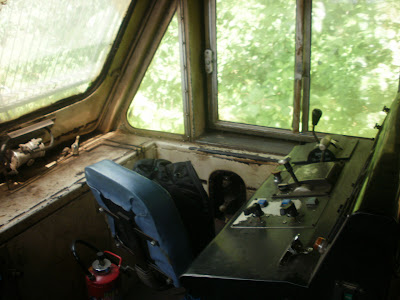 My first reaction to the falls was a big “WOW”!! The falls is spectacular; with water gushing down in full force. True to its name; it looks like a cascade of milk pouring down the mountain. Luckily; being a week day; there were few tourists around; thus enabling us to take in the beauty of the falls. There is a rail bridge that runs parallel to the falls. The water rushes down the mountains & forms a pond at the bottom and then flows downwards below the railway bridge to continue its journey to Mandovi.

The scene of a train passing besides the falls; with sprays splashing on the compartments is beautiful!! The typical inhabitants of any Indian tourist place –  monkeys were in abundance. However; unlike their other counterparts; these monkeys were non aggressive & did not believe in grabbing things. 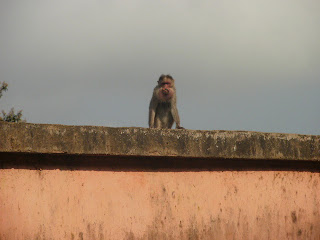 It was nearing late noon & things get dark very fast. So; began our downward trek to our journey to Goa. We had become experts by now & so the trek was less tiring. We trekked along the railway line  to Sonaulim station – a small rail station. We again were lucky enough to get a lift in a good train engine – similar to the one mentioned above. So; I was lucky enough to travel in locomotive engine driver’s cabin twice in a single day !

From  Sonaulim; we travelled to Kulem (Collem) railway station – the last place of civilisation on the Goa side. The Goan adventures is for another blog!!

Would strongly recommend visiting Dudhsagar between late August & mid October. Late monsoons; the trek is pleasant & the water flow is strong. During non monsoon months, the water flow is considerably reduced; but still a force to be reckon with. Also; suggest checking the train schedules; unless if you wish to rough it out like us.  Also; beware of leeches (animal form. Human forms – you will encounter on the weekends). We were also lucky not to encounter either form ! :) :)

So; enjoy your Dudhsagar trip !!!
Posted by Suhas Katti